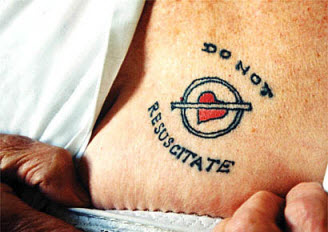 Docs are docs, and unfortunately, try as I might, I can’t stop being one just because I put on a printed Hawaiian shirt and hop on a plane. For many of us, there will come that moment, when the words “is there a doctor in the house?” are uttered. And we will approach the situation, hair standing on end and queasy feeling in stomach at being out of our usual element, to assess and comfort. If we’re lucky, the situation will be little more than a simple malady, but for this group of doctors, it was much, much worse. Terrifying even.
On a transcontinental  flight a patient went into cardiac arrest, several physicians were on the flight. The patient was had no pulse, was not breathing, unresponsive. CPR was initiated. They attached automated external defibrillator (AED) pads to the patient’s chest wall, supplied by a flight attendant. There was no discernible heart rhythym for which the AED could deliver a potentially life saving shock; a dismal situation known as pulseless electrical activity (PEA), from which recovery is dismal, even with rapid transportation to a hospital.
CPR was carried out for about 25 minutes, which is about what most physicians would consider a reasonable amount of time in continuous PEA to say that a patient is dead. All the physicians present agreed that the patient had not responded, and further CPR would be futile. They attempted to “call the code”, to stop CPR and declare the patient deceased. The physicians were informed by the flight crew, however, that CPR must be continued. Amazingly, according to the airline’s policy CPR must be continued until the plane had landed and presumably the care of the (now dead) patient had been transferred to EMS.
Some of the physicians refused to continue and did not participate any longer. The flight crew stated that because of the airline’s policy, if the remaining physicians did not continue CPR, the flight crew would be required to continue CPR on their own. Learning this, two of the physicians decided to continue CPR with the assistance of one of the flight attendants. During this time, the flight had been diverted to a local airport for an emergency landing, where the care of the patient was handed off. By this point CPR had been continued for about 40 to 45 minutes.

All this makes me wonder, what are the airlines policies on these issues and what is their rationale? Is it simply so that properly trained medical personnel can assess the patient and determine the need to continue CPR? Perhaps, this is not a bad idea, after all you can not really expect or ask someone without the proper training to make the decision to stop CPR. But what if, as in this case, there were people who have had medical training present and were qualified to make this decision. What if I had been that physician, or worse, that patient? Only instead of a trans-continental flight, this had been a trans-pacific flight, where the next emergency landing is three or four hours away. In such a situation, would there be an expectation that CPR is to be continued for that entire duration? Furthermore, would a flight crew stop CPR at the request of  family member who states that their loved one would not want to be resuscitated?

These questions may seem trivial at this point, but with the aging of our population, this situation will likely take on greater importance in the coming years. If buying a plane ticket is akin to rescinding a Do Not Resuscitate (DNR) order, or to consenting to undergo futile, aggressive medical care, then this is something that the public needs to know about.