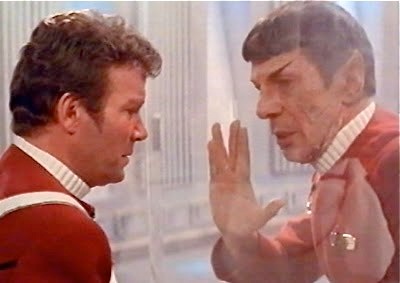 That was the axiom a dying Spock posed to Captain Kirk just after he saved Kirk’s behind (again). Well in that case, (spoiler alert),the needs of the many did outweigh the needs  of the few. . .until they didn’t (if you’re really curious watch Star Trek 3, or better yet, don’t and just take my word for it). Curiously, I wonder if things will unfold in a similar fashion in regards to findings reported by the National Cancer Institute in its CT lung cancer screening trial published last June in the New England Journal of Medicine.

The study findings have been hit with a hail of criticism, both for it’s lack of what many would describe as a  proper control (the authors used chest x-ray rather than “usual care”) and for the very high number of false positive results resulting in the possibility of excess burden in terms of anxiety and unnecessary procedures.
In the study, the authors enrolled people at “high risk” for cancer, this was defined as those between 55 to 74 years of age who had at least 30 pack years of smoking under their belt (number of packs per day multiplied by number of years smoked). These people were then randomly assigned to either a chest x-ray group or a “low dose” CT scan group, with 3 images over 2 years. The authors chose to use chest X-rays as the control, because at that time the PLCO trial was under way comparing chest X-ray to usual care. The authors feared comparing CT screening with a control group of usual care, as it may no longer be the standard of care, (should the PLCO trial demonstrate chest X-ray as a useful screening tool) . They guessed wrong, and unfortunately the the PLCO trial using chest X-ray as a screening tool proved fruitless, leaving usual care as the continued standard. (One could make the argument, however, that as there was no significant difference between CXR screening and usual care, then the control was likely appropriate).
In any case, the study continued onward, and the results as detailed in the article’s abstract as well as in their initial press release in November of 2010, touted its impressive findings.

I can not sum up how to you how astounding these results were/are to the medical community, specifically to those who are involved as patients, or in the treatment, diagnosis, support, research, and  fund raising of lung cancer. For years, many in this segment have felt like the orphaned stepchildren of the cancer world. We experience greater incidence than most cancers, have the greatest number of deaths, and yet have less treatment options, less fundraising, less media attention, and the general sense that lung cancer is a condition brought on one’s self by irresponsible behavior.

So the preliminary results above brought about a sense of excitement. Finally there is something do! Heck, with these results, light me up! I don’t even smoke, but what harm could come from a few seconds of exposure to a little itty-bitty dose of radiation, followed by its interpretation by a guy (or gal) in a dimly lit room?
As it turns out, quite a bit of harm. 26,722 people were assigned to the low dose CT arm of the study, a total of 1060 cancers were diagnosed in these people. And while there was the above mentioned mortality benefit in those that truly did have cancer, about 96% of people who had a positive scan did not end up having cancer (false positives). Those people who received a positive scan (of whom we know 96% did not have cancer) endured 2043 invasive diagnostic procedures (of which 503 were an open chest surgery called a thoracotomy). From these procedures, there were 75 complications classified as “major”, while in the control group, only 768 people underwent an invasive procedure.
An analysis of the data shows that overall 99.5% of high-risk people who underwent this screening received no benefit from the screening.  A total of 217 people needed to be screened to prevent one death (nnt=217). But at a cost of one in four people being screened receiving false positive test results, and one in thirty people screened undergoing unnecessary surgery.

The question now is, what will be done with this data? The more specific question is this; will this translate into actual implementation of screening of high risk people? If various physician organizations such as the ACP, ACCP, ATS, and ACR decide on the basis of this data that they would recommend screening, then it would be likely that Medicare would, in turn, approve of CT screening for lung cancer. And as medicare goes, so do many private insurers. As I perused the ACP (American College of Physicians, of which I am a member) site to get a sense of where its members stand on this issue, I noted the responses on a web board where members sound off on this and other studies. ( good link to point–counterpoint opinions published in Annals). While the verdict was not unanimous, it was decidedly negative. Most felt that the risk of harm was simply too great to justify screening everyone.

Among the comments that was particularly telling were  the following:

“Let’s put our time and effort instead into tobacco cessation, prevention, tax increases, smokefree laws, and tobacco counter-advertising, and you will get results that greatly supersede these puny stats!!! . . .”

A contrary point was the following:

“many want to deny the result because it “costs too much”, “causes too much anxiety” in the positive group when only a small proportion have the real thing. . . While primary prevention of smoking is cheaper and likely more effective, it hasn’t worked. Once addicted, it’s hard to quit…’It’s easy, I’ve done it a hundred times,’ according to Mark Twain. The cost analyses will come in, but would this be tolerated in breast or prostate cancer?”

The following quote seemed to sum up how most of the commenting ACP members felt about the study:

“In the end, the greatest contribution of this study is going to be its demonstrating how a well-conceived and well-conducted study showing a POSITIVE effect can be used to argue strongly AGAINST the widespread implementation of the intervention studied. This study provides strong evidence that the small positive effect is negated, by far, by its adverse effects (invasive diagnostic tests on false positives) and its cost per QALY, which will undoubtedly be astronomical.”

And so with that, it would appear that the needs of the many  have indeed outweighed the needs of the few, at least for now. We await further quality of life and cost analyses, which will be forthcoming. In addition, smaller screening studies are underway in Europe, which raises the possibility of data from multiple studies being pooled together. So it would seem that, at least for the time being, lung cancer screening appears to be dead in the water. Will it remain that way? I know a certain Starfleet officer that was dead too.