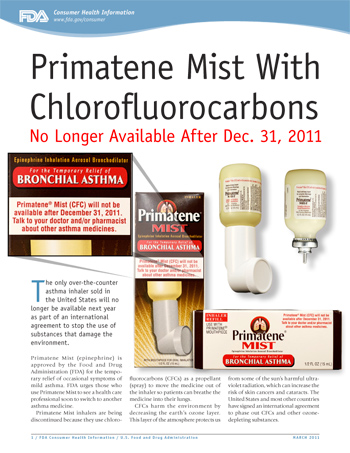 I have a confession to make, it pains me to write this post, about the removal of over-the-counter epinephrine (a.k.a. primatene) inhalers, the only inhaler available to asthmatics without a prescription. I mean, it literally causes me a visceral pain. But it’s not for the reason you might think. It has nothing to do with all the hoopla concerning the politics of right vs. left . Neither is it necessarily the strange notion of telling people that they have to breathe worse, so we can save the ozone layer, so they can breathe better (though you must admit that does sound weird).
No, it has more to do with the simple fact that I (and undoubtedly other physicians as well) hate this inhaler. It is a dangerous, possibly addictive, unforgivably poor substitute for a real asthma regimen, and should have been banned from the market long ago.
And so for me, here’s the painful part; I don’t think that simply removing it from the market is the right thing to do.

Unlike most inhalers used to treat airway constriction, epinephrine has been the only such inhaler available over the counter without a prescription.  Until a few years ago, most inhalers were made with an ozone blasting C.F.C. based propellant. By law, they were changed to a C.F.C.-free formulation, known as H.F.A. Most C.F.C. based substances (remember Freon?) were banned many years ago after the U.S. signed onto the Montreal Protocol, an agreement to reduce the use of ozone depleting substances. However the continued manufacture of inhalers containing C.F.C’s, including primatene continued under an “essential-use” exemption. That exemption ended for most prescription metered dose inhalers (M.D.I.) containing albuterol at the end of 2008.  If you were using or prescribed an albuterol inhaler around that time, you probably noticed a precipitous climb in the price of those inhalers. Inhaled epinephrine (primatene) however continued to be available under the essential-use exemption, which continued until 12/31/11 (you’re next, combivent and maxair!). However, unlike the phase-out of albuterol inhalers,  there have been no measures taken to make sure that HFA formulations of primatene are being produced to ensure its continued availability, therefore this drug is no longer available as of New Year’s day 2012.
Is that necessarily a bad thing? As I eluded to above, the use of inhaled epinephrine is not condoned by any medical society guidelines that I know of. Using it raises concerns over the potential of abnormal cardiac rhythms. To my knowledge the drug has not been widely studied, and may never be due to safety concerns. Any patient of mine that is on it is asked to discard it and never use it again. But what about those people that are not patients of mine, or patients of anybody, because they have no insurance? I doubt that anybody with mild or even moderate asthma may benefit from its regular use. Might it be beneficial for people with a severe asthma attack who do not have a prescription for albuterol? Take a look at  this google search of “primatene saved my life”.  What the takeaway is from these individual anecdotal experiences is debatable, but certainly there at  is the at least the impression that several people are using this medication in emergency situations in lieu of proper medical care, and they feel that it is a vital safety net.
What are they going to do now?
Here’s what the FDA recommends that patients that have been using primatene do after it is no available, on their website (along with what I imagine would be the likely response from the target audience):

In reality, these are reasonable recommendations to be sure, particularly for the person with occasional symptoms. But people are unlikely to seek medical assistance from free medical clinics unless they are actively ill, and even at that point, it would be unlikely that they could be seen quickly enough to address their needs.
This leads me to the obvious question. If a medication as potentially dangerous as inhaled epinephrine has been available for so long over the counter, why do you need a prescription to get a much safer albuterol inhaler? One could even argue that the requirement that one has to have a prescription to use a relatively safe albuterol inhaler has driven people to use a much more dangerous option which has been much more readily available. I think it would have been the right thing to do to make available a non-prescription albuterol inhaler before pulling a vital, albeit dangerous safety net away from uninsured asthmatics.